With shipments of 20.3 million iPhones and a market share of 19%, iOS overtook Nokia’s Symbian platform during the quarter to take second place worldwide.

‘The iPhone has been a phenomenal success story for Apple and a watershed product for the market,’ said Canalys VP and Principal Analyst Chris Jones.

It’s an impressive success story, given that Apple has only been in the smart phone market for four years.

With the next-generation iPhone anticipated in Q3, it’s likely that Apple’s position will grow even stronger in the second half of the year. 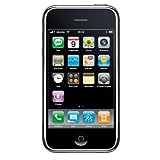 iPhone redefines what you can do on a mobile phone. Tap a number to make a call. Listen to voicemail in any order with Visual Voicemail. 3G gives you fast access to the Internet and email over your cellular network. And 3G makes it easier to multitask: When connected via 3G, you can surf the web even while you’re on a call.