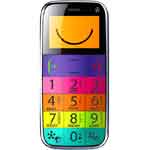 Just5 (just five) is an international brand of a designer and manufacturer of cell phones with big buttons. Development of Just5 cell phones started in 2008, the trade mark was introduced on October 5, 2009.

Just5 cell phones are developed together with major design-bureau Newplan (in Beijing and Shenzhen). In 2009, a joint company Just5-Newplan was created.

Just5 cell phones are manufactured by ODMs in the Republic of China and based on Infineon and MediaTek hardware platforms.

In 2009, the Just5 brand was awarded Grand Prix in the “New Name” category at the BRAND OF THE YEAR/EFFIE event.