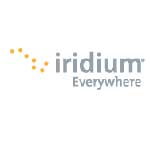 Iridium Communications Inc. (formerly Iridium Satellite LLC) is a company, based in McLean, VA, United States which operates the Iridium satellite constellation, a system of 66 active satellites used for worldwide voice and data communication from hand-held satellite phones and other transceiver units.

The Iridium network is unique in that it covers the whole Earth, including poles, oceans and airways.

The company derives its name from the chemical element iridium.

The number of satellites projected in the early stages of planning was 77, the atomic number of iridium, evoking the metaphor of 77 electrons orbiting the nucleus.

The satellites are frequently visible in the night sky as satellite flares, a phenomenon typically observed as short-lived bright flashes of light.