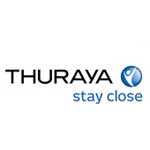 Thuraya – the Arabic name of the Pleiades, is a regional satellite phone provider. Its coverage area is most of Europe, the Middle East, North, Central and East Africa, Asia and Australia.

The company is based in the United Arab Emirates and distributes its products and service through authorized service providers. Its shareholders are a mixture of Middle Eastern and North African telcos (in which Etisalat is a major one) and investment companies.

Thuraya offers a range of products sold under their own brandname. Besides these products some 3rd party developers offer complete systems and accessories for their products.