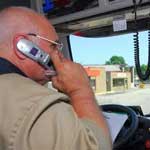 Researchers in India are developing a new technology that will prevent truck drivers and other road users from using their cell phones while driving. The technology based on RFIDs could also be integrated with police traffic monitoring.

Abdul Shabeer of the Anna University of Technology in Tamilnadu, India, and colleagues point out that globally around 20% of fatal road accidents with trucks and other heavy vehicles involved the drivers of those vehicles using a cell phone in their hand at the time of the accident. “Dialing and holding a phone while steering can be an immediate physical hazard, but the actual conversations also distract a driver’s attention,” Shabeer and colleagues say.

The team adds that when drivers are talking on a cell phone, whether in-hand or hands-free, their braking reactions are slowed and such drivers are statistically more likely to be involved in traffic accidents than those people not using a phone at all. Cell phone use also causes distractions that delays reactions to traffic signals, leads to poor lane discipline and to drivers inadvertently shortening the gap between their vehicle and the one in front. All such factors can increase the chances of an accident occurring.

The team has now devised a system that can determine whether a driver is using a cell phone while the vehicle is in motion and “jam” or block the phone signals accordingly using a low-range mobile jammer that ensures the vehicles passengers might use their phones unhindered. The system has the potential to report “infringements” depending on local laws and might also report vehicle registration number to the traffic police under such laws. The team suggests that an alternative approach might be to alert others in the vehicle that the driver is attempting to use the phone. They suggest that not only would such a system reduce road traffic deaths, but it would have the positive side effect of improving how the average goods vehicles are driven overall.