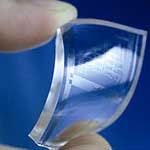 Smart phones almost as thin and flexible as paper and virtually unbreakable. Solar panels molded to cover the surface of an electric or hybrid car. Possible treatments for damaged spinal cords. It’s not science fiction. Those all are possible applications of a material known as graphene.

This so-called “wonder material,” the world’s strongest (100 times stronger than steel) and thinnest (one ounce would cover 28 football fields), is the focus of a new episode of the ChemMatters video series. The video is at www.BytesizeScience.com.

The video, from the award-winning Digital Services Unit in the American Chemical Society (ACS) Office of Public Affairs, explains how graphene’s incredible properties originate from the unique arrangement of its atoms. ACS is the world’s largest scientific society.

Like diamonds and coal, graphene is made up entirely of carbon. But unlike those materials, graphene’s carbon atoms are arranged in two-dimensional sheets, making it incredibly strong and flexible. Since graphene also conducts electricity as well as copper, it could lead to flexible cell phone touchscreens and transparent, inexpensive solar cells. Ongoing advances in manufacturing graphene are bringing these and other devices closer to reality.