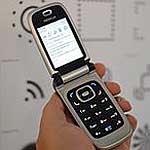 Near field communication (NFC) is a set of standards for smartphones and similar devices to establish radio communication with each other by touching them together or bringing them into close proximity, usually no more than a few centimetres. Present and anticipated applications include contactless transactions, data exchange, and simplified setup of more complex communications such as Wi-Fi.

NFC standards cover communications protocols and data exchange formats, and are based on existing radio-frequency identification (RFID) standards including ISO/IEC 14443 and FeliCa. The standards include ISO/IEC 18092 and those defined by the NFC Forum, which was founded in 2004 by Nokia, Philips and Sony, and now has 150 members. The Forum also promotes NFC and certifies device compliance.

NFC builds upon RFID systems by allowing two-way communication between endpoints, where earlier systems such as contactless smart cards were one-way only. Since unpowered NFC “tags” can also be read by NFC devices,[2] it is also capable of replacing earlier one-way applications.

NFC devices can be used in contactless payment systems, similar to those currently used in credit cards and electronic ticket smartcards, and allow mobile payment to replace or supplement these systems. Android phones incorporated the technology before Apple’s ubiquitous iPhone, as they reportedly decided not to include the new NFC feature in the October 2011 release of the iPhone 4S (however the feature is rumored to be scheduled for appearance in the next-generation iPhone due in Q4 2012)